Bright lights, big numbers, empty promises—the script and production for every tv commercial for a personal injury firm.  Dollar signs dance around the screen in massive type, while warnings flash in tiny type down at the bottom.  Once someone who needs a lawyer takes the bait, the machine starts running.  You never meet a lawyer; sometimes you don’t even talk to someone. A packet is emailed to you with marks for where to sign. Ten months later, you get an email saying this is the offer. If you don’t take it, you’re cut loose. Or, even worse, the firm continues slipshod representation, costing you the chance to get real compensation for your injuries.  Johnson & Alday takes a wildly different approach.

We recently had the privilege of representing a man who was t-boned in a car wreck.  The other driver hit him with such force that our client required a shoulder surgery—one of the most painful orthopedic injuries and surgeries.  While most firms would simply continue pumping the airwaves with bright and shiny graphics, we went to work.  We knew that the insurance company would first argue that there was no way his shoulder could have been injured in the collision.  So we immediately hired an accident reconstructionist expert to provide an expert opinion that the point of impact absolutely could cause this type of injury.  We also immediately inspected the defendant driver’s vehicle and obtained the black box information to confirm the defendant was dramatically exceeding the speed limit as he blew through a red light.  This information was preserved right away after the collision to ensure it was not destroyed.

Second, we conducted jury research with other attorneys and online to make sure we armed ourselves with proper information to use when we negotiated with the insurance company.  The defendant driver happened to live in a very defense-friendly venue/county, where juries are not known to render high verdicts.  When the insurance company pointed this out—after conceding the battle on the mechanism of injury—we were ready to show them that a client like ours, with an injury like his, would get a large verdict, no matter what county.

Third, we made sure to get a decade’s worth of our client’s prior medical records to ensure no mention of a shoulder injury, complaint, even a twinge before the collision occurred.  If an insurer can’t argue mechanism of injury and can’t argue about venue, they default to arguing that the medical condition pre-existed the collision.

As a result of the work we put in for our client on the front end, there was no prolonged litigation and the insurer was left with no argument.  Our client resolved his case promptly, fairly, and he was compensated very well for what he went through.

Doing the work. It’s more than an ad. It’s more than hollow words. And it means that when you get knocked off course, Johnson & Alday is the firm that gets you back on track. 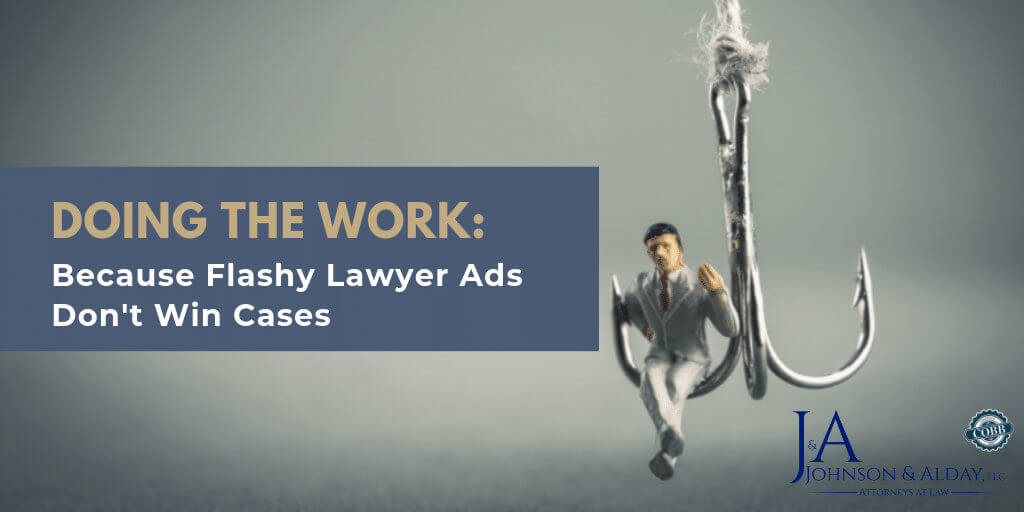